John Coleman Darnell joined the faculty of the Department of Near Eastern Languages & Civilizations as Assistant Professor in 1998; he became Associate Professor in 2004, and Professor of Egyptology in 2005. His interests include Egyptian religion, cryptography, the scripts and texts of Graeco-Roman Egypt, and the archaeological and epigraphic remains of ancient activity in the Egyptian Western Desert. The latter work has led to his interest in state formation, the use of rock inscriptions in the creation of “ordered” space, the development of iconographic syntax in the Predynastic rock art of the Egyptian deserts, and the economic status of the oases and the desert regions, particularly from the late Old Kingdom through the Third Intermediate Period.

Darnell has considerable field experience in Egypt. After working on the staff of the Demotic Dictionary Project in Chicago, in 1988 he joined the Epigraphic Survey of the Oriental institute, based at Chicago House in Luxor, Egypt. Before leaving the Epigraphic Survey as Senior Epigrapher in 1998, to take up his current duties at Yale University, he had helped to collate over three-quarters of the epigraphic copies now published in the first two volumes of the Reliefs and Inscriptions at Luxor Temple series, had co-authored the commentary volumes for those volumes, and had worked extensively on the scenes and inscriptions of both the original core and later additions of the Eighteenth Dynasty temple at Medinet Habu. Darnell is director of the Theban Desert Road Survey, an expedition continuing to grow and expand in the Western Desert of Egypt; he is also director of the Yale Toshka Desert Survey, a complementary expedition to the Theban Desert Road Survey farther south. Several publications of the work have already appeared, including: J.C. Darnell, et al.,Theban Desert Road Survey in the Egyptian Western Desert 1, Gebel Tjauti Rock-Inscriptions 1-45 and Wadi el-Hol Rock Inscriptions 1-45, OIP 119 (Chicago: Oriental Institute Press, 2002).

Discoveries have included the Scorpion tableau, perhaps the earliest historical record of ancient Egypt, recording the Abydene subjugation of Naqada and the foundation of a unified Upper Egyptian state at the dawn of Dynasty 0; the earliest alphabetic inscriptions in the Wadi el-Hol; a new Middle Egyptian literary text from the same site; important archaeological remains of the Tasian culture; Middle Kingdom, Second Intermediate Period, and New Kingdom outposts on the high plateau; and the earliest major occupation site thus far known for Kharga Oasis. Darnell is the author of a number of scholarly articles, dealing with many aspects of pharaonic culture, history, and language.

At Yale he has taught image-assisted courses on Egyptian religion and religious architecture, and a survey of Egyptian history, focusing on the mechanics of unity and disunity within the Nile Valley.  His Freshman Seminar on Egypt and Northeast Africa provides students with a broad overview of the history and cultures of Egypt, Nubia, and the Western Desert from remote prehistory through the nineteenth century; students in the seminar also learn the basics of ceramic analysis and epigraphy, working with original material in the Yale Peabody Museum.  Darnell also teaches a wide range of Egyptian text courses, for both graduate students and qualified undergraduates, reading the ancient texts and scripts, including: Ancient Egyptian Netherworld Books, Lapidary Hieratic Inscriptions, Ancient Egyptian Love Poetry and Related Texts, Medinet Habu Inscriptions, Demotic and Demotic Texts, and Cosmographic Books.

“Two Early Alphabetic Inscriptions from the Wadi el-Hôl: New Evidence for the Origin of the Alphabet from the Western Desert of Egypt,” Annual of the American Schools of Oriental Research 59/2 (2006) (with C. Dobbs-Allsopp et al.)

Egypt and the Desert

Writings from the Ancient World 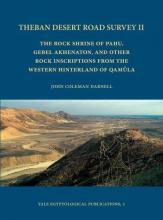 The Rock Shrine of Pahu, Gebel Akhenaton, and other Rock Inscriptions from the Western Hinterland of Naqada

Two Early Alphabetic Inscriptions from the Wadi el-Hol: New Evidence for the Origin of the Alphabet from the Western Desert of Egypt

The Inscription of Queen Katimala at Semna: Textual Evidence for the Origins of the Napatan State

The Enigmatic Netherworld Books of the Solar-Osirian Unity

Cryptographic Compositions in the Tombs of Tutankamun, Ramesses VI and Ramesses IX

The Festival Procession of Opet in the Colonnade Hall 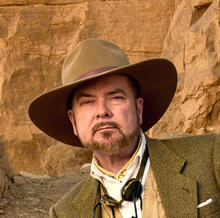 PhD 1995, The Oriental Institute of the University of Chicago