Home » Publications » Two Early Alphabetic Inscriptions from the Wadi el-Hol: New Evidence for the Origin of the Alphabet from the Western Desert of Egypt

Two Early Alphabetic Inscriptions from the Wadi el-Hol: New Evidence for the Origin of the Alphabet from the Western Desert of Egypt 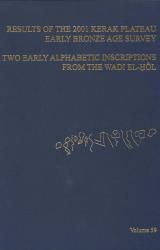 This volume is the editio princeps of the two early alphabetic inscriptions discovered by the Theban Desert Road Survey in the Wadi el-H l, near the middle of the desert filling the Qena Bend of the Nile. These early alphabetic inscriptions preserve unique palaeographic features revealing the probable origin of the alphabet during the Egyptian Middle Kingdom, arising from the contact of Egyptian military scribes with foreign language speaking auxiliaries. The sign forms preserve features of the lapidary hieratic of Middle Kingdom military scribes, and the signs' phonetic values originate in acrophony from the foreign names for the signs. Associated Middle Kingdom hieratic inscriptions are also published, supporting the presence at the site of Asiatic troops under Egyptian control during the late Middle Kingdom, the probable date of the inscriptions.

Press Information:
Annual of the American Schools of Oriental Research 59/2