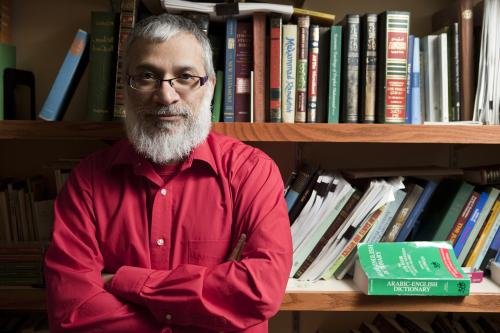 The Department of Near Eastern Languages and Civilizations at Yale University is pleased to announce that as of July 2016 Professor Shawkat M. Toorawa has joined Yale-NELC, and has begun teaching for the fall term of 2016. He received his received his B.A., M.A., and Ph.D. from the University of Pennsylvania. He has taught Arabic at Duke University, medieval French literature and Indian Ocean studies at the University of Mauritius, and Arabic and other literatures at Cornell University.

His current research and teaching interests include the Qur’anic lexicon, in particular hapax legomena and rhyme-words; the literary and writerly culture of Abbasid Baghdad; the southwest Indian Ocean; the 18th century Indian author, Azad Bilgrami; the poetry of the modern Syro-Lebanese poet Adonis; and the Creole language Mauritian author Dev Virahsawmy.

Professor Toorawa is a Co-Executive Editor of the Library of Arabic Literature, for which he is preparing a critical edition of the Shifa’ al-‘alil by the belletrist Bilgrami. He is also a Director of the School of Abbasid Studies. In addition to his teaching and research, Prof. Toorawa has brought to Yale his “Dr. T. Project” which meets regularly on Wednesday afternoons at the Whitney Humanities Center for tea, shortbread, and to learn Three Things Worth Knowing in Thirty Minutes. YaleNews has published a story featuring the Dr. T. Project in connection with the recent hire of Prof. Toorawa and Travis Zadeh, Assistant Professor of Religious Studies, which is part of Yale’s effort to strengthen Arabic and Islamic Studies.