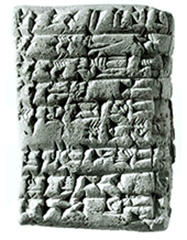 First known from clay tablets dating to the mid fourth millennium BCE, Sumerian shares with ancient Egyptian the status of being the oldest language ever recorded in writing. An isolated, agglutinating language, it was a vernacular in ancient Iraq until the end of the third millennium, after which it was used for another 2000 years as an important cultural language, similar to Latin in the Middle Ages. Sumerian texts, written in cuneiform script, include the earliest literary compositions worldwide, as well as incantations, lamentations, humorous prose compositions, law codes, royal inscriptions, letters, legal documents, and large numbers of administrative economic documents—some 100,000 texts of the latter category are available from the 21st century BCE alone.

At Yale, Sumerian is taught in a sequence of courses, from Elementary through Intermediate to Advanced, that focus on grammar, vocabulary, and signs and enable students from early on to read Sumerian texts in their original form. Additional courses are focused on specific Sumerian texts and Sumerian history and culture. Courses in Sumerian have graduate numbers only, but undergraduate students are welcome to take them as well, after contacting the instructors. A knowledge of Sumerian will be profitable to anyone interested in the first half of history.