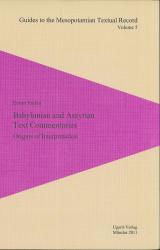 The systematic study of written texts began not in biblical Israel or the classical world but in ancient Mesopotamia. Nearly 1,000 clay tablets from Babylonia and Assyria, dating from the eighth to the second century BCE, comprise the earliest substantial corpus of text commentaries known from anywhere in the world. Texts commented on by Mesopotamian scholars include literary works, rituals and incantations, medical treatises, lexical lists, laws, and, most importantly, omen texts. This book provides the first comprehensive study of the challenging and so far little-studied Babylonian and Assyrian text commentaries. Topics discussed include the place of commentaries in the Mesopotamian philological tradition, cuneiform commentary types, hermeneutic techniques used by the ancient scholars, the sources of their explanations, the sociocultural milieu of Mesopotamian commentary studies, canonization and the formation of the commentary tradition, the reception history of the Babylonian Epic of Creation, and the legacy of Babylonian and Assyrian hermeneutics. A complete catalog of the commentaries and full editions of two typical examples complete the study, which is accompanied by a bibliography and ample indexes.