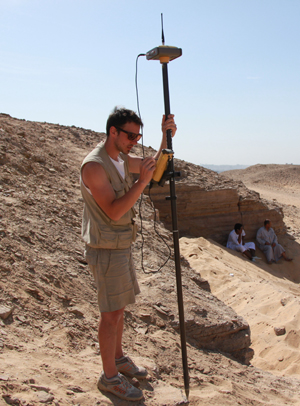 Through the digital and archaeological work of Alberto Urcia, Associate Research Scientist, Yale-NELC has continued the collaboration with The Aswan-Kom Ombo Archaeological Project (AKAP) which is a joint venture between Yale University and University of Bologna directed by Dr Maria C Gatto (former Associate Research Scholar at NELC and now Research Associate at University of Leicester, UK) and Prof. Antonio Curci. This project has investigated since 2005 selected areas between the modern towns of Aswan and Kom Ombo in Upper Egypt, and a section of the desert east of Kom Ombo. The major goal of the project is to define the nature of cultural interactions between Egyptians and their southern neighbors, the Nubians. A multidisciplinary approach is applied to survey and rescue excavation activities, with particular emphasis on the application of new digital technologies, of which Alberto Urcia is in charge in collaboration with Curci. In more than a decade of field work hundreds of archaeological sites have been discovered, dating from the Paleolithic to the Ottoman period, and ranging from settlements, cemeteries, cultural sites and rock art locales. Current interests of the project are the Prehistory, to include the Predynastic-Early Dynastic period; the Middle Nubian groups, contemporary to the Middle Kingdom and the Second Intermediate Period; Nubian evidence of any phase; and rock art. Unfortunately, most of the sites are in imminent danger of being destroyed, thus the need for rescue operations. At the rock art site of Nag el-Hamdulab the earliest evidence of an Egyptian king, waring the White Crown of Upper Egypt, has been discovered, together with a short Hieroglyphic annotation, which has been interpreted by John C. Darnell, Professor of Egyptology at NELC, as mentioning the Following of Horus, the Egyptian royal court traveling along the Nile to collect taxes.  Many of the project’s publications are available on Academia.edu.