Religion and Mysticism in Early Islam 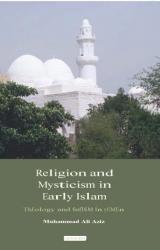 Scholar, mystic and visionary, Ahmad Ibn 'Alwan lived through the transition period from Ayyubid to Rasulid rule in thirteenth-century Yemen. He was well known in his time for his critique of the ruling elites and their governance, and left behind a substantial body of writings on Islamic mysticism, theology, law and exegesis of the Qur'an. Here Muhammad Ali Aziz presents a comprehensive portrait of the life and works of Ibn 'Alwan, arguably the greatest religious and mystical thinker of medieval Yemen.

By placing Ibn 'Alwan in the context of the religious and political background in Yemen, Aziz delineates the development of Sufi orders, the interplay between Sufi, Shi'i and Sunni traditions, and the impact of Ibn 'Alwan on the history of Sufism and Islam. He discusses Ibn 'Alwan's religious and social convictions and their impact on the religious and intellectual life of Yemen in subsequent centuries. Ibn 'Alwan's legacy lives on, not least in an annual pilgrimage to his tomb. Aziz demonstrates the ways in which Ibn 'Alwan's quasi-legendary image has been appropriated, imagined and used by representatives of various political, religious and intellectual trends in modem Yemeni society, from Islamists to secular nationalists.

The first study of lbn 'Alwan and the first comprehensive study of medieval Yemeni mysticism in Western scholarship, Religion and Mysticism in Early Islam is essential reading for all those interested in mysticism, early Islam, Sufism, Yemen, and religion and history more generally.