The Islamic Sufi Aspects in the Literary Thought of Najeeb Mahfouz 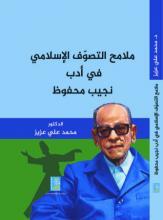 This book was written by Dr. Muhammad Ali Aziz as a result of teaching a course on Mahfouz every other year at Yale for nearly 10 years. There are a few books written on the Sufi aspects on Mahfouz’s works. However, none of them has tackled the issue of Islamic mysticism. Our focus was only to trace the Islamic type of mysticism. Dr. Aziz traced this concept in nearly all Mahfouz’s works (novels, stories, and plays). However, whenever any work is devoid of Islamic meaning of mysticism, he would indicate that he has not found any link to attract his attention.  The Islamic Sufi Aspects in the Literary Thought of Najeeb Mahfouz is mainly written in Arabic for Arabic readers. It is published by Dar Djlah in Jordan in 2018. (E-mail: dardjlah@ yahoo.com, www.dardjlah.com, ISBN: 978-9957-71-945-6). It shows how mysticism plays a significant role in the literary thought of Naguib Mahfouz, the noble prize winner for literature in 1988. Dr. Aziz argues that when Mahfouz tells us about Islamic Sufi institution, he does so as though he was a leader of one of these Sufi brotherhoods. The depth of Mahfouz’s knowledge in the field of spirituality made Dr. Aziz feel that Mahfouz is a Sufi sheikh, disguising in the literary form of the Arabic literature.