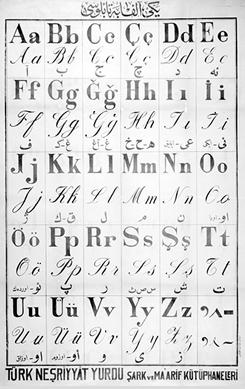 Turkic languages go back 5,500 to 8,500 years. These languages are spoken throughout a large geographical region in the Middle East and Central Asia. The most widely spoken Turkic language is Türkiye Türkçesi, also known as Modern Turkish. It is the official language of the Republic of Turkey; and it is also spoken in Cyprus, Australia, the United States, and many European countries, including Germany, Netherlands, Belgium, France, Bulgaria, and Greece.

Yale offers Modern Turkish courses for Elementary, Intermediate, and Advanced levels. The four-course sequence of Elementary and Intermediate (L1-L4) is designed to guide students to proficiency in the four skills of listening, speaking, reading, and writing. Students have the option of taking Advanced courses (L-5) which will help them develop the language skills to speak adequately in social situations, read and write non-specialized material without frequent resort to dictionaries or grammar books.

Modern Turkish courses also serve as a basis for the study of Ottoman Turkish which is also part of the NELC Turkish program course offerings. The Ottoman Empire was very vast and contributed significantly to the art, history, and literature, as well as Sufi teachings and practices of Islam for over 700 years. Since the Ottoman Empire stretched from the Balkans to North Africa and Persia, knowledge of Ottoman Turkish is extremely useful for those who are interested in studying Islamic history, literature, and art.

In addition to NELC’s Turkish program curriculum, Yale also hosts and organizes Turkish cultural events through other programs and organizations such as The Turkish Society of Yale Graduate Students and Scholars (TYGS) which was founded in 2011 to foster a sense of community among Turkish students and scholars.