A Screening and Conversation with Sayed Kashua, Israeli-Palestinian Author 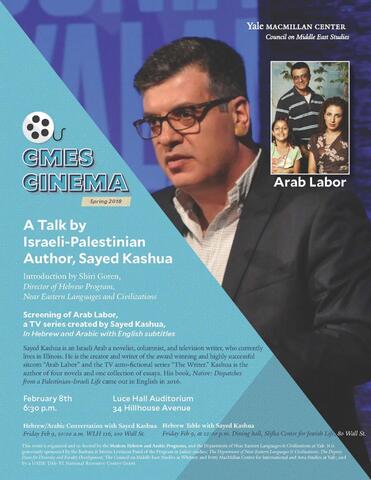 Sayed Kashua is an Israeli Arab a novelist, columnist, and television writer, who currently lives in Illinois. He is the creator and writer of the award winning and highly successful sitcom “Arab Labor” and the creator of the TV auto-fictional series “The Writer.” Kashua is also the author of four novels and one collection of essays. His book, Native: Dispatches from a Palestinian-Israeli Life came out in English in 2016.

Screening of Arab Labor, a TV series in Hebrew and Arabic with English subtitles.

This event is organized and co-hosted by the Modern Hebrew and Arabic Programs, and the Department of Near Eastern Languages & Civilizations at Yale. It is generously sponsored by the Barbara & Morris Levinson Fund of the Program in Judaic Studies; The Deputy Dean for Diversity and Faculty Development; The Council on Middle East Studies at Whitney and Betty MacMillan Center for International and Area Studies at Yale; and by a USDE Title VI National Resource Center Grant.