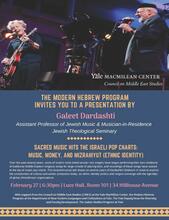 Invites you to a presentation by

Over the past several years, some of Israel’s most noted secular rock singers have begun performing their own renditions of traditional Middle Eastern religious songs for large crowds of adoring fans, and recordings of these songs have soared to the top of Israeli pop charts. This lecture/musical talk draws on several years of Dardashti’s fieldwork in Israel to explore the complexities of cultural and artistic production today, as ethnic identity politics and religion converge with the agendas of global philanthropic organizations.

With support from the Council on Middle East Studies (CMES) at the Yale MacMillan Center, the Modern Hebrew Program at the Department of Near Eastern Languages and Civilizations at Yale, The Deputy Dean for Diversity and Faculty Development,The Judaic Studies Program at Yale