Nadine Moeller: “The Origins of Two Provincial Capitals in Upper Egypt: The Two Sister-Sites at Tell Edfu and Dendara.” 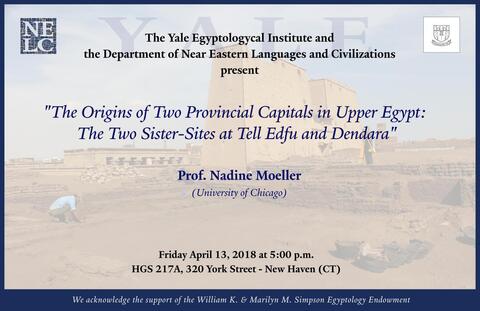 “The Origins of Two Provincial Capitals in Upper Egypt: The Two Sister-Sites at Tell Edfu and Dendara.”

She will present the latest discoveries of her excavation at the sites.

Recent geomorphological and archaeological data from the recent fieldwork conducted at the ancient cities of Tell Edfu and Dendara provide new insights into the evolving landscape of the dynamic floodplain and its influence on the long-term development of these early urban centers. At both sites it has been possible to excavate specific areas of the settlement that had been founded directly on the natural sand and bedrock during the late Old Kingdom. At Edfu we now know that the Old Kingdom town gradually expanded westwards making best use of the flood-free zone, which can be seen by the newly excavated settlement quarter dating to the 5th Dynasty being situated in close proximity to the much later Ptolemaic temple. Further expansion of the town occurred during the end of the Old Kingdom / early First Intermediate Period, a time that has usually been associated with political and economic crises that might have been triggered by a short time climate change.The ancient city Dendara also saw a major expansion at the end of the 3rd millennium BCE to the east of the temple enclosure, and the new fieldwork conducted at the site offers a glimpse of the organization of this new town quarter in a previously unsettled area. These two examples, Tell Edfu and Dendara, are particularly interesting since this time frame corresponds to a politically troubled period that led to a fragmented state with several power centers. However, from an urban perspective, cities in southern Egypt seem to have seen a phase of expansion during this time. This paper will also further examine the layout and organization of the respective town quarters at Edfu and Dendara.