The Classical Near East 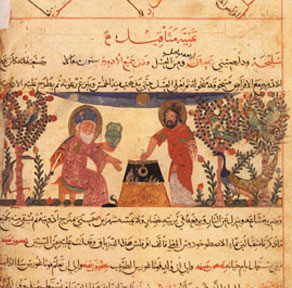 The Classical Near East is a PhD specialization that includes ancient Iran, the early Islamic caliphates, the late Roman and Byzantine Near East, and adjacent areas. It integrates the philological and historical study of Near Eastern societies in an age of momentous religious, social, and political change. The basis for this research is in the vast manuscript and other corpora in late ancient and medieval Near Eastern languages such as Arabic, Greek, Middle Persian, and Syriac.

The designation Classical Near East is deliberately broad and avoids any tendency to study the Near East primarily in national, ethnic, or religious terms. It focuses on the first millennium of our era and links the periods before and after Muhammad, antiquity and the Middle Ages. The Classical Near East does not include the earlier millennia of cuneiform culture, pharaonic Egypt, or the full range of the Arabic humanities from its origins until the present. These can be studied through the other specializations in the NELC department.

The departmental strength for the study of the Classical Near East is in the learned traditions of the Sasanian kingdom, their continuations, and their translations in Arabic, and the period of translations from Greek into Arabic, as well as the historical and cultural transition from the Persian Kingdom and east Roman Empire to the Islamic caliphate and Byzantium. Classical Near East students investigate religious, scientific, philosophical, literary and other traditions of the Classical Near East understood in their social and institutional contexts. They are encouraged to pursue their studies with faculty in NELC as well as Classics, Religious Studies, and History to bridge other areas of interest.

Requirements. All students in this specialization study classical Arabic, the most extensively attested language of learning of the Classical Near East, and the one which all other Near Eastern manuscript traditions interacted in the wake of the changes induced by the Islamic conquests. Because of the need to master classical Arabic, students in the Classical Near East specialization share much coursework with students in the Arabic Humanities specialization, including an advanced classical Arabic seminar every semester. They also take an intensive seminar on the Sasanian Persian kingdom and other courses on the late ancient Roman and Persian Near East and early Islam. Students must pass reading examinations in classical Arabic, as well as in two other classical Near Eastern languages from the following list: Armenian, Aramaic (Babylonian or Syriac), Coptic, Greek, Hebrew, Middle Persian, New Persian, Sanskrit. Offerings in various small-corpus languages of ancient Iran, such as Avestan, Bactrian, Middle Persian, Old Persian, Parthian, and Sogdian, may be made available according to student interest.

Students learn to use original manuscripts in their research whenever possible. Yale’s Beinecke Rare Book & Manuscript Library offers exceptional resources for such training and practice, including some of the earliest Syriac documents still extant and one of the largest Arabic and Persian manuscript collections in North America. Students also have access to material remains of the Classical Near East such as Sasanian coins from Ardashir I to Khusrow II in the Bela Lyon Pratt Study Room for Numismatics, objects from Yale’s expedition to Dura Europos at the Yale Art Gallery, and Aramaic incantation bowls in the Yale Babylonian Collection.

Applicants for the PhD in this specialization should already have attained the ability to conduct research in at least one of the languages listed above, preferably more than one. Students with no background in Arabic are unlikely to be admitted. All students will be encouraged to spend at least one summer in a country in the Near East relevant to their studies, if feasible. Each student is required to demonstrate reading knowledge of academic French and German before taking comprehensive examinations.